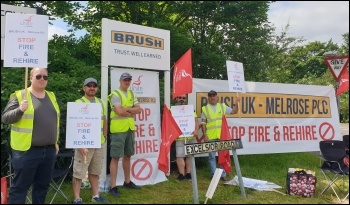 Maintenance engineers at Brush Electrical Machines, based in Ashby-de-la-Zouch in Leicestershire, are now in the fourth week of a 12-week strike against huge attacks on pay, terms and conditions by yet another vicious management using 'fire and rehire'.

The Socialist Party supported their picket line and spoke to Dale Clarke the Unite rep:

"We are on strike because during Covid the management decided to use fire and rehire to drastically cut our terms and conditions. We have been told take it or leave it.

"We go to everywhere the manufacturer sells their generators, third-world countries, even war zones, offshore in India, the Middle East, where we are four or five to a room. During the pandemic it was business as usual. We were expected to travel the world including places like Brazil and India. We had to quarantine in solitary confinement for two weeks at a time.

"They have attacked every single part of our contract including cuts in our basic salary, uplifts when we are overseas or offshore in terrible conditions and our holiday breaks when we return from overseas to rest. We will be between ten to fifteen percent a year worse off.

"Venture capitalists Melrose, who own the company, historically have asset-stripped companies, they have just done it to GKN. In 2019 the four directors from Melrose decided to give themselves £42 million bonuses each!

"Unite has calculated they made around £93,000 per employee. They claim our pay is not sustainable, but Brush did make £17.5 million last year in a Covid year!"