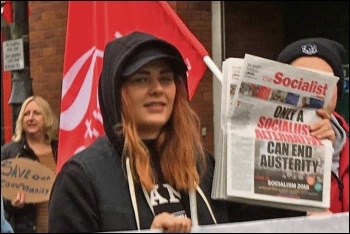 Her family, friends and comrades will always feel it, and will continue to press for action to ensure that Beth's tragic death could not be repeated. Beth died after being struck by a tree branch when she momentarily leaned her head out of a train to south Wales in 2018.

A coroner's inquest into the accident has now concluded. But it has only hinted at the many failings of the private companies which dominate the railways.

The inquest heard that the signs warning passengers not to open windows while the train was moving were small and not clearly displayed. But why was this possible in the first place? 'Droplight' windows - still in use on the train that Beth was travelling on - are relics of the 1970s, when people didn't have to wear seat belts in cars!

Attention was also drawn to the overgrown state of the tracks, which had not been attended to for seven years. Tree specialist Julian Forbes-Laird told the inquest that the accident had been "foreseeable".

Some press reports have shamefully attempted to let train companies and Network Rail off the hook by foregrounding the fact that Beth and her friends had drunk alcohol on the night when the accident happened. Travelling by public transport when you've had a drink is a responsible decision. Safety measures should be in place to ensure one split-second mistake can't have fatal consequences.

The cutting of corners and failure to invest in the service is why Beth fought for the real socialist nationalisation of rail and other key services - not the sham version offered by Boris Johnson or Mark Drakeford in Wales - a publicly owned and democratically run, affordable and safe service that would put people's needs and lives above profits.