A socially distanced protest calling for global justice, aimed at the G7 meeting in Cornwall, took an unexpected turn on 11 June. As we gathered on the Parkinson Steps, the usual place for demonstrations at Leeds University, we were met by police and security staff.

They claimed that a recent risk assessment deemed it unsafe. One protester said he had been attending protests there for 30 years without a problem. No-one from the University and College Union (UCU) or student groups had been shown the risk assessment, or told of any safety issues.

We suspect that the real reason is the visibility to the passing public. Some drivers hooted their support, and passing students took leaflets and some joined the protest.

We were offered a place round the corner. However, the 100-strong group decided to go ahead with the protest on the steps.

This is no doubt a foretaste of the attack on the right to protest that the movement will face if the Police, Crime, Sentencing and Courts Bill becomes law.

'Hong Kong to be Free! Revolution Now!' was the message, in English and Chinese, on black flags and t-shirts of over 250 overwhelmingly young and mainly Chinese people in Nottingham on 12 June.

An exhibition highlighted the fight of Hong Kong people for democracy and freedom under British colonial and Chinese rule for over 100 years, and graphically showed the brutal repression of protest by the Chinese regime and the democracy movement, particularly since 2014.

The anniversary of the British handover to China in 1997 had become the focal date for protest in Hong Kong. In 2019, millions took to the streets in Hong Kong to stop the imposition of direct rule from China. They faced police violence and arrest and detention.

In 2020 and 2021, the Chinese regime used Covid restrictions as an excuse to prevent protest in Hong Kong, and have been preventing gatherings and issuing fines. So-called 'dissidents' can now be detained in China. There is a campaign to release those detained in 2019, and one of them, Agnes Chow, was released on Saturday.

A mass workers' party in Hong Kong with a socialist programme, and an appeal to workers on the Chinese mainland, can turn the heroic struggles of the Hong Kong people into victory. This is even more urgent as US and China's rivalry in the region threatens the working class in Hong Kong, China and across the region. 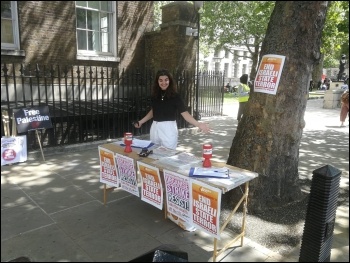 Many of the several thousand young demonstrators on 12 June approached the Socialist Party, often tugging a parent or friend along, wanting to learn more about us, and discuss what can be done.

One north London woman informed us this was her first demonstration, and that her daughter convinced her to come. "I have seen Palestinians suffer since childhood", she explained, "but my daughter keeps on fighting, so I feel that I have to as well". Many others told similar stories, displaying the importance of youth participation in the fight for global change.