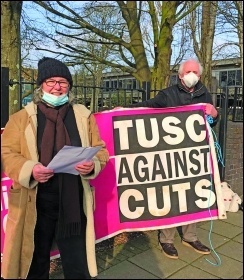 What we're fighting for:

The council has given in to the government's demand for cutbacks and privatisation. That is why Enfield Labour council has reduced bin collections, and plans to lease the council-owned Whitewebbs golf course and surrounding woodland to a private company.

Establishment politicians - Tory, Labour and Lib Dem - have carried our cutbacks to our local services. We need politicians prepared to stand up to big business and the rich to demand the funding we need.

John says: "Over the last ten years, austerity has more than halved the funding for the care service I work in. As a trade union representative for public sector union Unison, I know that workers in understaffed services are highly stressed, and struggling to provide the quality services our communities need and deserve."

We say that the community and trade unions should come together to draw up a budget that meets Enfield's needs. It's time to stand up to the government to win back the millions stolen from our communities.

We need councillors who demand that it's the super-rich billionaires who pay for the crisis, not ordinary working-class people. If elected, John will vote against all cuts and council tax rises.