"A scathing, humorous and urgent call to arms in the fight for socialism" 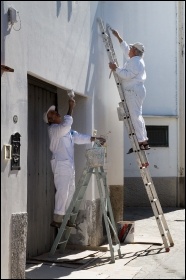 Workers today still face similar issues to those faced by the 'ragged-trousered philanthropists' at the beginning of the 20th century, photo Jorge Royan/CC   (Click to enlarge)

'The Ragged-Trousered Philanthropists' by Robert Tressell, published in 1914, portrays with compassion the plight of the working class in the early 1900s. However, he does not idealise the working class either: the workmen in this tale are depicted 'warts and all'. Mingled with empathy, the author's rage at the inaction, ignorance, and complicity of some workers in the capitalist system is inescapable.

Although the settings alternate between various buildings where the workmen are labouring, much of the action takes place in a house called 'The Cave'. Under the thumb of bosses Rushton & Co., the workmen renovating The Cave are under huge pressure to cut corners, scrimp and rush the job with as few hands as possible.

All this is to the detriment of their very survival; as soon as the job is complete, the impending 'slaughter' will leave them unemployed, semi-starved and desperately wandering the streets in search of work.

The lead up to the Edwardian era, in which the narrative takes place, saw waves of industrial action. The working class, concentrated in the urban workplaces due to the industrial revolution, engaged in numerous strikes over pay, conditions and safety. Notable movements included the 1889 east London dock strike over pay, and the 'Great Unrest' of 1910 onwards in which mass industrial action took place. Tressell himself was a politically active member of the Social Democratic Federation, which described itself as 'Marxist'.

Tressell's workmen, however, are in a tangle of political confusion; some are at varying stages of political enlightenment, as their fellow worker, Frank Owen, attempts to convince them of the need for socialism. It is no easy task. Some are openly hostile, others wilfully ignorant, and many seemingly want to believe capitalism is the only way forward, perhaps afraid to catch a glimpse of their own collective power.

In his 'Great Oration', Barrington, another converted socialist and a labourer, describes the abundance of wealth already produced by the working class, even under the chaos of capitalism, and explains how it could be fairly distributed for the benefit of all under socialism. To the amazement of some of the workmen, Owen explains the source of poverty through the 'money trick', where workers are paid less than the value of what they produce and capitalists keep the difference as profit.

Despite their destitution, some workmen cling to their deeply entrenched views: that capitalism cannot be overcome, that enjoyment of life is not for 'the likes of them', and that the running of society should be left to their 'betters'.

Although the conditions of the working class have improved since the book was published, many of us can still identify with the 'struggle for life' described in Tressell's book. Tressell puts before us the possibility of a socialist society in which abundance, enjoyment of work and stability are available to all. More than just a brilliant work of fiction, The Ragged-Trousered Philanthropists is a scathing, humorous and urgent call to arms in the fight for socialism. The burning issues of profiteering and unstable work have not gone away. With the rise of the gig economy and, more recently, the Covid pandemic, they have returned with a vengeance. This shows that Tressell's call to arms is as urgent now as it was then.