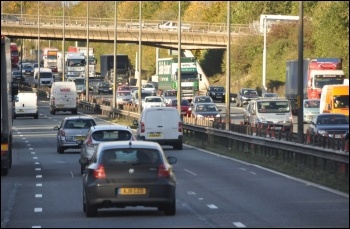 In Birmingham a new tax has been forced on the city that will hit the poorest hardest, takes no account of income or ability to pay, and which is causing growing anger among the community. We have a Labour council doing the Tories' dirty work and handing the bill to the working class instead of fighting back.

On 1 June the city council introduced the Birmingham Clean Air Zone (CAZ) which requires drivers of older and more polluting vehicles to pay an £8 charge to use the roads in central Birmingham.

The CAZ is supposedly an attempt to drive down the levels of air pollution in the city, in particular the 'fine air particles' which can cause numerous very serious diseases such as strokes and cancer. Birmingham suffers from very high levels of these pollutants in its air, at the maximum limit as recommended by the World Health Organisation.

The city council had been threatened with a £60 million fine if they did not introduce the CAZ to improve air quality. Now workers with older, less expensive cars will foot the bill. But even the city council's own feasibility study found that introducing a daily charge on motorists would not lead to significantly cleaner air.

Public Health England has reported that air pollution causes an estimated 1,460 excess deaths each year in Birmingham and the surrounding areas. A Kings College London study in 2019 showed that pollution caused the shortening of lives of children and specifically named north Birmingham suburb Erdington as a pollution hotspot, with as many as 91 deaths attributed to pollution in 2011.

However, all this shoddy scheme will do is cause inconvenience and financial hardship to a minority of drivers while emissions and congestion continue apace.

After many decades of local campaigning, and inaction by Labour and Tory governments, the Camp Hill line is finally being reopened for passenger rail services and the Metro is to be extended. But without a serious plan to tackle overuse of cars across the entire city and address the continuing long-term decline in bus usage, the impact on traffic levels will be insufficient to effectively deal with the problems.

Immediate steps should be significant investment in bus and cycle infrastructure. Make public transport free to all, and increase the frequency and reliability of buses with security measures such as additional on-board staff and safer bus stations. There should be massive investment in electric buses, and a push towards demand-responsive bus services which are more flexible to people's needs. Renationalisation of the bus network should be a first step - an industry which has been bailed out by the state during Covid, despite racking up massive profits while overseeing continuous decline in ridership.

As well as expanding and improving public transport, we need to replace the remaining petrol and diesel vehicles with affordable hybrid or fully electric vehicles in the shortest time possible. This could be done by nationalising the electric vehicle industry under workers' control and management, and retooling the existing car plants to produce electric vehicles.

There are now two classes of motorist in Birmingham: those who are allowed to drive freely, and those who are not. To make matters worse, the council has placed the onus on the motorist to take the initiative in paying the daily charge. Should they forget, or fail to pay for any other reason, they are liable for a £120 fine!

We now have the spectacle of local Tory politicians like the West Midlands Mayor Andy Street opportunistically arguing against the implementation of his own party's scheme. Northfield Tory MP Gary Sambrook jumps on the bandwagon and writes "this impacts our poorer residents the most who cannot afford to buy shiny new cars." However, nobody should be fooled into believing that Sambrook holds any sympathies for the suffering of the poor - this character was one of the 318 Tory MPs who shamefully voted down feeding 1.4m of the poorest children during the school holidays last year.

So where is the opposition from Labour? Judging from the comments of Preet Gill, MP for Birmingham Edgbaston, we shouldn't expect much! She supports the CAZ and described it as a "bold, new idea". Since they've been running the city, Birmingham's Labour councillors have sacked 12,000 council employees, tried and failed to cut bin workers' pay, attacked the homecare workers, and closed down countless local services.

What is crystal clear is that working-class people in Birmingham have no party that will stand up for us in the council chamber, or in Westminster. Despite receiving millions of pounds in funding from trade unions, the leadership of the Labour Party wants to prove that it can be relied on to look after the interests of British capitalism. Keir Starmer has made it clear that he is shredding what remains of Jeremy Corbyn's radical manifesto of 2017 to this end.

This isn't good enough; the unions should no longer hand over their members' money to a party which is batting for the opposite side. We need a new mass workers' party which will take urgent measures to clean up the environment and make sure that it is the rich and the elite of society who foot the bill.