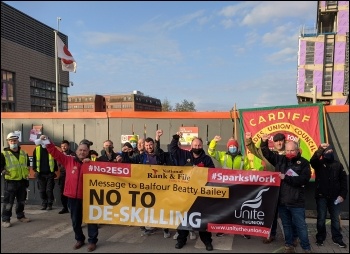 The 'sparks', rank-and-file construction electricians in Unite, have yet again defeated the deskilling agenda of the big electrical contractors.

EDF Energy, Balfour Beatty and NG Bailey opened up their offensive almost a decade to the day when workers kicked off their ultimately successful six-month fight against the 'Besna' contract, the last main attempt by the bosses to attack wages in the electrical trade in this way.

These were being strictly applied by the Tory government, with protesters being arrested on protests over NHS pay and the murder of Sarah Everard. On a few occasions, police also tried to break up legal strikes. No wonder the #NO2ESO protests took place behind facemasks - for safety's sake and to avoid arrest!

The Socialist Party and the National Shop Stewards Network (NSSN) have given support and solidarity right through the sparks' struggle. There has been a weekly Socialist Party bulletin, giving reports from the protests.

We were there on 24 February, when, at a few hours' notice, the first protest took place outside EDF Energy's HQ near Victoria Station in London. It was short and sharp but the warning was laid down: back off or we step up the fight!

The rank-and-file electricians welcome the commitments that have been secured, including the withdrawal of the ESO and the employment of new apprenticeships. But correctly they add: "However, there is much work to be done" in ensuring ending the threat of deskilling once and for all, as well as tackling issues such as agency labour, direct employment, blacklisting and bogus self-employment. But far better to fight these after a win.

This victory comes after other wins by workers taking action, such as the Manchester bus drivers, who went on an 85-day indefinite strike against 'fire and rehire', and the Thurrock binworkers who defeated pay attacks by their Tory council after six weeks out.

As the employers and their Tory government look to make workers pay for the Covid crisis, the growing action against the bosses' brutal offensive, and especially the increasing number of victories, show that if the unions give a fighting lead, workers can win. This should be taken up by the unions to build a united fight against the Tory pay freeze in the public sector and the NHS. The fight against Besna in 2011-12 took place at the same time as the massive two million-strong 30 November public sector pensions strike and the sparks joined the picket lines in solidarity.

In Wales, the campaign should continue to pressurise the Welsh government to ensure that lucrative construction contracts for public projects are only awarded to companies that adhere to national agreements and ethical practices - no blacklisters or anti-union employers - and they ensure their sub-contractors do the same.

The defeat of ESO ranks with that over the Besna. Many of those sparks have played leading roles this time, and a newer generation has joined the battle. The word needs to be spread round the sites to all trades, who themselves can be targeted for deskilling by greedy bosses looking to protect their profits - we can fight and we can win so get organised in the union!