Editorial of the Socialist issue 1139 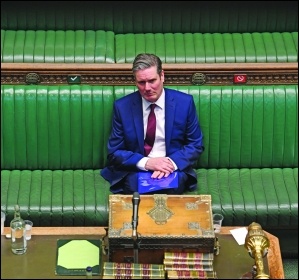 The myth of Johnson's electoral golden touch has been shattered by the Chesham and Amersham by-election. The Tory vote slumped to 36% - having previously never dropped below 50%. The local issues which drove the revolt appear to have been the building of the HS2 high-speed rail link through their local area, and the government's ripping up of already minimal planning regulations. It is estimated that costs of HS2 could reach a massive £106 billion, almost double the original estimate, and that it is unlikely to reach Leeds and Manchester until 2040! It is a honeypot for private construction companies, while the needs of ordinary commuters, transport workers and communities are ignored.

The government's approach to democratic control of planning and building regulations is also summed up by recent events in Ledbury, Hertfordshire. In March, against the opposition of the local town council, the government gave permission for a housing development. Why? Well just 48 hours earlier John Bloor, the billionaire property developer responsible, had bunged £150,000 into the Tory party coffers.

No wonder voters in Chesham voiced their disgust, picking up the half-dead Liberal Democrats, who don't even oppose HS2, as a means to protest against the Tory government. This will not be the last electoral disaster for Johnson. As post-Covid austerity kicks in, and 'levelling up' fails to materialise, he will face further blows at the ballot box, including in the North and Midlands, which in turn will accelerate the widening of the already deep splits in the Tory party.

For working-class people, however, there is an urgent need to an alternative to the pro-capitalist politicians. That isn't the Liberal Democrats, who have been punished for their participation in the vicious cutting Tory-LibDem coalition government from 2010-15. But nor is it Labour.

The by-election also illustrated the total lack of appeal of Starmer's pro-capitalist Labour. They got their worst ever by-election result of 622 votes, 1.6%. Starmer's primary purpose has been the systematic obliteration of Corbynism, in order to once again make Labour a reliable party from the point of view of the capitalist class. This is now a party that suspends from membership a representative on its national executive committee from Unite - its biggest union affiliate - while welcoming with open arms the previous Tory speaker, John Bercow. These moves have been justified, however, on the grounds of electability! Nothing could be further from the truth. In Chesham and Amersham under Corbyn, Labour got 11,734 votes in 2017 and over 7,000 in 2019.

This by-election is yet another illustration of the need for the workers' movement to create its own political voice, representing the interests, not of the spivs and speculators, but of the working-class majority. We would argue for such a party to put forward a clear socialist programme - based on the nationalisation of the major corporations and banks - so that all their resources could be harnessed to meet need rather than being squandered on the profits of a few. And decisions on housing, transport, and every aspect of our lives could be decided democratically rather than behind closed doors by the bosses and the politicians who represent them.