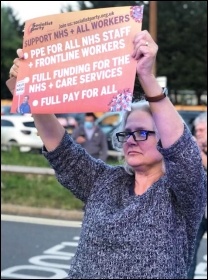 Joining a protest for PPE, full NHS & care funding, and full pay for all   (Click to enlarge)

Despite the Tory government extending coronavirus restrictions until 19 July, rather than bringing them to an end on 21 June, the furlough scheme will continue to be downgraded and gradually dismantled as planned. This means that from the 1 July the employer will be expected to contribute 10% of workers' wages, and the government will only provide 70%.

The BBC has reported that "record numbers of young people are also choosing to stay in education and are not looking for work" - but it has ignored the fact that in many cases young people's choice is between minimum wage, zero-hour contracts and poor working conditions, or further study. They do not have the opportunities to find well paid and stable employment.