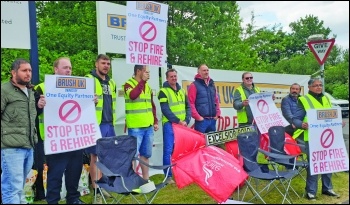 Service engineers at Brush Electrical Machinery are in the fifth week of their strike against a 'fire and rehire' attack on pay and conditions (see 'Engineers in fourth week of strike action against huge fire-and-rehire attacks).

Unite rep, Dale Clarke, spoke to the Socialist on the picket line: "The management have now moved the goalposts. They issued notices to us last week, saying that we have until 1 July to sign the new contract, or they will withdraw our right to be rehired. Basically, they are saying 'sign or be sacked'.

"The dispute has been going on since November, but Melrose plc, the company that owned Brush Electrical, is now claiming that they sold us some time between February and June to another company - One Equity Partners. They sold us during a dispute without our knowledge! The new company seems quite happy to continue railroading this through.

"We have to put a stop to fire and rehire, it needs doing at a national level."