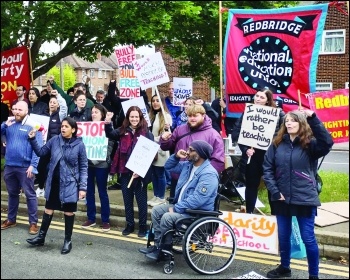 That Tuesday was the second strike day at the council-run secondary in Redbridge, east London. The National Education Union (NEU) is defending a sacked rep and three other staff victimised for exercising 'Section 44' health-and-safety rights.

Assistant heads policed the gates like bouncers. Students filed past a loud and spirited picket line demanding: "Stop the bullying!" The culture under the new head has led to the departure of many longer-standing staff and fear in the workplace.

The borough's Labour council has opposed the union, siding with the bullying senior leadership team. As we go to press, strikers plan to march on Redbridge Town Hall on 23 June. If Labour councillors refuse to stand up for workers, trade unionists should consider standing independent candidates against them.

The strike has caused significant disruption, with classes packed together in the sports hall. This flies in the face of Covid safety as case numbers rise - and underlines management's blasé attitude to student and staff welfare. Bosses even brought back older students with the promise of a free lunch to supervise 'sports day', as cover for the striking staff!

Despite the culture of fear and strike-breaking efforts, numbers on the picket line remain strong. But naturally, the bullying is not limited to the staff.

One picket told the strike rally that a senior manager had recently remarked on a student's skirt length: "Don't you have any dignity?" Standing up for herself, the student asked "does it make you uncomfortable, sir?" He reportedly replied: "Extremely!"

School workers were outraged at this sexist attack. They also noted that white students with skirts of the same length were not subjected to similar comments.

Louise Cuffaro, newly elected to the NEU's national executive committee, joined fellow Socialist Party members on the picket line. "The very solidarity you're feeling here is the solidarity you should be feeling every single day in the staff room!"

But "you have to fight to get the time to get the break in the staff room!" The fights against bullying and intolerable workload are fights the NEU must take up nationally.

The next planned strike days are Tuesday 29 June to Thursday 1 July.