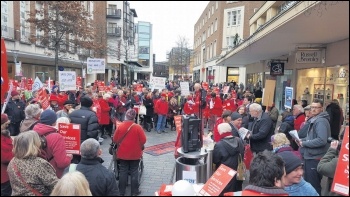 Protest in against degrading of Devon NHS in Exeter, 3.12.16, photo Sean Brogan   (Click to enlarge)

Exeter Trades Council has agreed to support the demonstration in Exeter on 3 July. The time for clapping our NHS staff is over. Clapping does not put food on the table or pay the rent! The miserable proposed offer of 1% is an insult to staff. With inflation already running at over 2% - this would mean a pay cut. During more than ten years of austerity, many NHS workers have lost over 20% of pay in real terms. There are reports of staff leaving the NHS in droves due to exhaustion and feeling under-valued. Waiting lists stand at a record five million. The Tories and their cronies have made millions. It is time to stand up and defend our NHS!

Exeter Trades Union Council will join with Keep Our Health Public, Health Campaigns Together and NHS Workers Say No, to support the 15% pay demand for NHS staff, fight privatisation and demand safe conditions for everyone in the NHS.