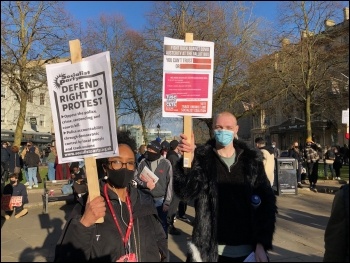 Even Parliament's human rights committee (JCHR) has lambasted the Tories crime and policing bill. Restricting the right to protest will breach human rights laws and criminalise peaceful protesters, it claims.

Giving Home Secretary Priti Patel powers to define 'serious disruption', the JCHR says, is "unacceptable". Clauses such as that allowing protests to be restricted for being too noisy should be scrapped. We say the whole bill should be ditched. It is the Tory government tooling up to crack down on any future opposition to their attacks on workers and young people.

But we can't rely on legal arguments and parliamentary niceties. This government will only listen if we organise mass action. We need to step up the 'kill the bill' protests. And the trade union leaders need to take a lead and mobilise their more than six million members in that fight.