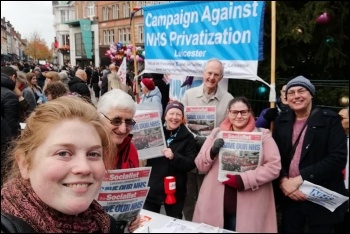 Private healthcare is embedded in the provision of accident and emergency treatment at the Leicester Royal Infirmary. That was the nub of a tragic loss by a mother-to-be reported in the 'Leicester Mercury' in March, summed up by the headline "I was losing my baby, but sent home and told to take a painkiller".

The triage was carried out by a clinician working for DHU Health Care, a so-called community interest company. The mum said she was in and out in five minutes, with no checks carried out, and she was told she would not be admitted to A&E and was advised to go home. Astoundingly the clinician was part of a national triage service organised by 'NHS 111 First' initiative.

The tragedy occurred last September, the mother approached the media because of DHU Health Care's dismissive response to her complaint. "They've admitted they should have referred me but not apologised, and in the same letter said I wasn't in pain or bleeding heavily, which I was and I told them that I was".

In the 2019 general election Boris Johnson claimed he would finance the building of 40 new hospitals; the claim quickly became a downright lie when it was revealed that only six new hospitals would be built. This included the proposed hospital reconfiguration in Leicester, where three acute care hospitals will be reduced to two, and the Leicester Royal Infirmary will be the centrepiece.

Unbelievably, under the cover of the pandemic, the NHS Trust has forced through the proposals (see 'Save Leicester General Hospital'). But not without campaigners winning a commitment to more beds than was originally proposed.