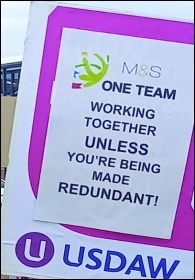 Usdaw members are in dispute over redundancy payments   (Click to enlarge)

Workers at the DHL depot in Long Eaton, Derbyshire, members of Usdaw, have taken two rounds of 24-hour strike action in a dispute over redundancy payments as the site is being shut down. Members of Nottingham Socialist Party have visited the picket line and strikers spoke to the Socialist.

"We are a warehouse that supplies Marks & Spencer with their goods. When the site opened 34 years ago it was run by Tibbett & Britten, but in 2004 we TUPE'd over to Exel Logistics who told us our redundancy rights from T&B would remain unchanged. In 2008 Exel was acquired by DHL.

"In February 2020 we were told we would close, eventually given a closing date of end of July 2021. During lockdown, from March 2020, DHL refused to pay the extra 20% of furlough, and so for nearly a year effectively paid no wages at our site at all. This meant that on top of losing our jobs we were also hammered with a 20% pay cut, while DHL made millions in our absence. We suspect they haven't even paid back any of the other 80% they owe the government.

"In consultation they then refused to acknowledge the original T&B redundancy enhancements, which they said were superseded by a pay deal from 2010: they were not. There were only enhancements for those on the DHL contracts in this deal. At no time have employees been told that they have lesser redundancy rights. But now members are being offered half of their redundancy when management have had their correct full settlements.

"It's still in dispute and has resulted in two 24-hour strikes - the first in the site's history. M&S and DHL won't even get back round the table with us to negotiate a fair settlement. As a result, the site closes in just four weeks' time. Our members face a lengthy fight to get what they believe is rightfully theirs, while the management on those T&B contracts had protected rights and are trousering huge payoffs. Our members are getting offered half of theirs. It's scandalous and heartbreaking but we fight on."