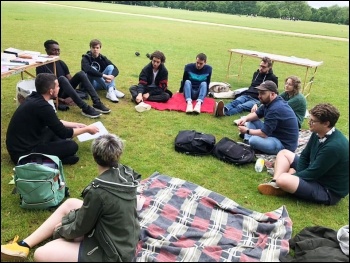 Young members of the Socialist Party met in Hyde Park, London, on Saturday 14 June to discuss the issues facing young people in the city and the youth campaigns that we can launch over the summer.

The plenary session was an informal discussion on youth perspectives. We talked about the prospects for youth unemployment, the housing crisis facing young people in London, and the need for a fighting political voice for workers and young people.

The political discussion set the scene well for the rest of the meeting, as we split into two groups to discuss theory and practical tasks.

While some of us did a campaign stall by the entrance of the park to sell the Socialist newspaper, another group remained in the park for a discussion on Leon Trotsky's 'Transitional Programme' and its application today. We sold several copies of the Socialist.

The final session focused on youth campaigns, including the Youth Fight for Jobs campaign, and what demands we should raise in our campaigns.

As well as organising more park meetings, we are planning to do more youth stalls and other activities in London's boroughs to meet with young people who want to fight for jobs, education and homes for all.