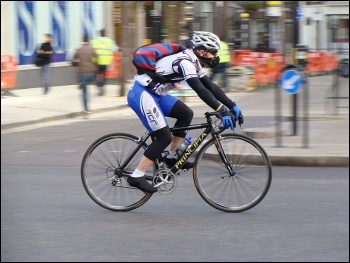 On 13 June, the annual general meeting of the National Clarion Cycle Club took the decision to support a motion from Tuxford Clarion that outrageously removed a "divisive" reference in its constitution to socialism. The amended version expresses a banal commitment to "fairness, equality, inclusion and diversity".

This trampling on the founding principles of the 126 year-old cycle club provoked uproar from local Clarion clubs. They point to the lack of open and widespread discussion about the Tuxford motion prior to the AGM, which was held after a year of lockdowns, and question the democratic process. Only 14 out of 28 clubs were registered to vote at the AGM, which was held on Zoom.

The first Clarion cycling club was founded in 1894 and took its name from the popular socialist weekly newspaper, Clarion. The aim was to "combine the pleasures of cycling with the propaganda of socialism".

The Clarion cycling clubs spread quickly throughout the country, offering working-class people an escape from long working hours and poor living conditions. Between the wars, Clarion racing teams travelled abroad to compete in 'Workers' Olympiads', and several Clarion members were killed fighting against Franco's fascists in the Spanish revolution.

Shamefully, the current national Clarion leadership, seemingly embarrassed by the word 'socialism', did not defend Clarion's constitution. Yet mention of socialism has not prevented new growth in membership of Clarion in recent years.

As with other parts of the wider working-class, trade union, labour and cooperative movements, including cultural and sporting wings, over the last decades, a middle-class and reactionary assault against the practice and idea of working-class solidarity, and the goal of socialism, has taken place.

Clarion clubs are discussing what to do next. Some are mooting leaving the National Clarion and setting up a new national body.

An earlier 2006 breakaway, the 'National Clarion Cycling Club 1895', pledges "to protect the founders' commitment" to combine cycling with socialism. Local Clarion clubs, such as London Clarion, proudly keep 'socialism' in their own constitution.

Despite the 'cuckoos-in-the-nest' in National Clarion, the determination of local clubs means the Clarion ideal that "socialism is the hope of the world" will steadfastly remain.