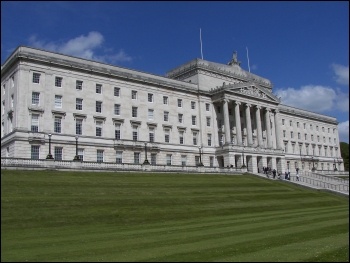 Edwin Poots, leader of the Democratic Unionist Party (DUP), the largest party in Northern Ireland, has resigned just three weeks after he won the position. This is the latest twist in the ongoing crisis in the North in the aftermath of Brexit and the creation of the 'Irish Sea border'.

Poots was forced to resign after an internal revolt in the DUP over concessions he made to keep the power-sharing Northern Ireland Assembly in place. He agreed to appoint a new DUP first minister, alongside Sinn Fein's deputy first minister, and appeared to concede to Sinn Fein's call for the quick introduction of Irish language legislation that was agreed upon previously.

Following the election of a new leader, the DUP, along with Sinn Féin, has just seven days to re-nominate a new first minister and deputy first minister. Otherwise, Stormont will collapse again, with a likely new election in October.

The current infighting among a small cabal of DUP public representatives reflects a deeper malaise in Northern Ireland's unionist camp and, specifically, the DUP's calamitous mishandling of the Brexit crisis.

Initially, Johnson's Brexit treaty with the EU was hailed by former first minister Arlene Forster and the DUP leadership as a 'fantastic opportunity' for Northern Ireland's commercial sector. But this sanguine take on Tory Brexit has rapidly transformed into a perceived existential threat to unionism and the Protestant population itself.

This fear was the trigger for days of sectarian rioting in Belfast and other cities in April this year, along with the heightened presence of the Protestant paramilitary Ulster Defence Association, which in turn provoked a leadership crisis in the DUP.

Moreover, the hailed 'business opportunities' have instead led to disruptions in food supplies and warnings of workplace closures and job losses as employers weigh the impact of additional administrative costs and dislocated supply chains.

As Donal O'Cofaigh Northern Ireland Cross-Community Labour councillor and Militant Left member writes: "The difficulties facing the political elite are serious. The fundamental problems remain. The economy remains in the doldrums; austerity cuts will continue to bite; changing demographics, the full consequences of Brexit and the move towards independence in Scotland are all raising tensions and divisions over the national question...

"Against heightening tensions and efforts from bourgeois and petit-bourgeois politicians from all sides to exploit divisions to their own ends, it is more vital than ever that workers in the North of Ireland stand united behind a socialist, internationalist platform.

"Whenever an election to Stormont comes, it is vital that there is a platform of socialists standing on a genuinely cross-community basis to offer an alternative to the sectarian politics of division and failure. Vital to that end will be the role of trade union activists, who must seek all means to push their organisations to chart a course for our class towards real lasting peace and socialism. Part of that process is the need to form a new mass party of the working class."