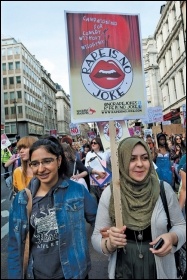 Rape is no joke, photo Paul Mattsson   (Click to enlarge)

'Rape has been decriminalised'. This was a 2019 assessment of a situation where just 1.6% of rapes result in someone being charged. Each year around 128,000 people are victims of rape but only just over 2,000 charges are made. This was a factor in the outpouring of anger that followed the killing of Sarah Everard in March this year.

Lack of confidence in the police and justice system contribute to a situation where fewer than 20% of victims of rape report it.

One factor in this is a well-founded fear of how difficult and traumatic the experience of pursuing the perpetrator would be given the treatment of those who report rapes to the police.

There have also been suggestions that the Crown Prosecution Service (CPS) has set a secret conviction rate target and that this has led to prosecutors dropping what they consider to be weaker or more challenging cases.

Given the scale of this crisis, it might be reasonable to expect action. But this Tory government does not respond with urgency to the needs of ordinary people no matter how clear the evidence is - as the catastrophic dealing with the pandemic has shown.

Instead, the government has, after a process already lasting two years, come forward with a review of the situation and a commitment to... consultations, a pilot and a small amount of spending. For example, as part of Operation Soteria a handful of police forces will now test whether the balance should be shifted away from investigating the credibility of complainants to focusing on the suspects!

This is not a pandemic story - the figures had been falling well before that. Tory Home Secretary Priti Patel signed the foreword to the review which says they are "deeply ashamed" of the situation facing rape victims. So she should be. Tory cuts are a huge factor in the situation but are not dealt with in the review.

Since 2010, the CPS budget has been cut by 25% with an accompanying 30% reduction in staff. Police forces in England and Wales lost 21,732 officers between March 2010 and March 2018 - 15% of their total number. And the cuts to legal aid have been devastating. But there are other factors too.

This review is not going to deliver justice for rape victims. The horrific rape figures themselves indicate levels of harassment, violence and abuse that are systemic. They are ultimately the consequence of the inequality, including sexism, at the heart of the capitalist system which the Tories defend.

Capitalism is based on the exploitation of the majority by a tiny handful of big business bosses. The police and justice system are ultimately necessary for the maintenance of that system and reflect its inequality and oppression.

Fighting for justice - and an end to violence against women - includes fighting austerity, challenging sexism, and raising the demand for community and working-class control of the police and the judicial system. Necessary for this is the building of mass working-class organisations - fighting trade unions and a new mass workers' party with a socialist programme to meet the needs of all.