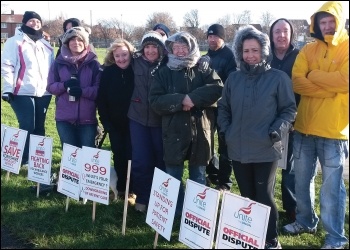 A report was received from the local clinical commissioning group (CCG) to update on progress made towards implementation of the government's NHS white paper proposals to create new 'integrated care systems' (ICS) by April 2022.

NHS campaigners have concerns that these vague proposals could lead to an entrenchment of private companies sitting on ICS boards. In reality, this is already happening.

The CCG representative did state that it was a contract condition that private service providers pay employees the living wage. However, the commissioners apparently have no influence or control to enforce it!

Wakefield council's health scrutiny committee has only raised concerns about the perceived weakening of its role, while not raising any objections to the very real threat of a fundamental break-up of the founding principles of the NHS.

We will not sit back and rely on councillors who timidly acquiesce to the Tories' attempts to dismantle the NHS and move it into the direction of a USA-style healthcare system.

Healthcare trade unions and community campaigners need to build a mass rank-and-file movement to expose, resist and defeat the NHS white paper, and build a fully funded and publicly owned and controlled alternative.