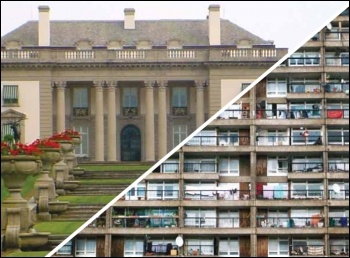 Rich get richer, poor get poorer   (Click to enlarge)

There are now more millionaires than there ever has been, an extra 5.2 million of them. It turns out, if you own high-value property, or have substantial investment in stocks and shares, the economic bailout measures have suited you just fine.

Meanwhile, millions of us remain on furlough with a 20% pay cut, have been thrown onto the unemployment scrapheap, face bosses' 'fire and rehire' or a public sector pay freeze.

Global wealth grew by 7.4% in 2020, despite the devastating health and social consequences of the pandemic. It is clear where that wealth has gone. For workers to get our hands on it, we need to nationalise the banks and big companies under democratic workers' control and management. Coordinating internationally, and on the basis of a socialist plan, wealth can be redistributed to meet the needs of all, including the 55% of the world's population who currently own just 1.3% of the world's wealth.