Link to this page: https://www.socialistparty.org.uk/articles/32764 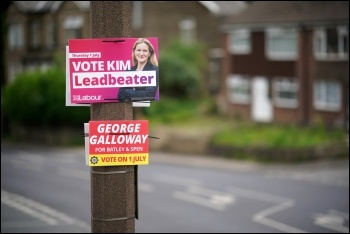 Posters during the Batley & Spen by-election campaign   (Click to enlarge)

Another condemnation of Starmer's New Labour

Labour managed to narrowly hold on to Batley and Spen in the parliamentary by-election on 1 July, scraping in by 323 votes. The Labour leadership are sighing with relief. In reality, however, this result is a further condemnation of Starmer's New Labour.

An opposition worthy of the name should have been able to romp home following Matt Hancock's resignation, which has fuelled anger at the Tories' 'one rule for us, and another for the rest of you' approach to Covid measures. This has compounded the existing simmering fury at the underfunding of the NHS and underpaying of its workforce.

Elected Labour candidate Kim Leadbeater is a local woman, sister of the former MP for the seat, Jo Cox, who was brutally murdered by a supporter of the far right five years ago. Yet Labour's vote fell by more than 9,000 from the last general election and by a thumping 16,500 from 2017.

This by-election was yet more evidence that Jeremy Corbyn's anti-austerity programme was a far better vote winner than Starmer's pro-capitalist policies.

George Galloway, standing for the Workers' Party, won 8,264 votes (21%). Labour MPs have been to the fore in attacking him for running a 'divisive campaign'. Most of them ignore the fact that Labour put out a leaflet in the predominantly Muslim parts of the constituency featuring a picture of Boris Johnson shaking hands with Modi, the right-wing Hindu nationalist prime minister of India. This was not Labour objecting to Modi's policies, but a blatant attempt to win the votes of Muslim constituents on communal grounds.

The Labour right's frenzied attacks on Galloway are an attempt to avoid the primary reasons why a sizeable section of Batley and Spen's voters, mainly but not only from a Muslim background, cast a vote for Galloway. Galloway campaigned for "a new working-class politics", saying that "we fight Labour because we seek to replace it as the party of the working-class. It's really not rocket science. We consider Sir Keir Starmer and Boris Johnson to be two cheeks of the same arse."

His history of opposing the imperialist wars against Iraq and Afghanistan, particularly the memory of the way in which he fiercely stood up to US senators in 2005 over the Iraq war, has left a long-lasting impression of a man who is prepared to fight for his principles. Galloway's record of opposing the Iraq war is in stark contrast to Starmer's Labour, where Peter Mandelson is back as an advisor - a man who was a key figure in Blair's warmongering governments.

These are not only historical issues. The nightmarish consequences of the wars in Iraq and Afghanistan continue today. At the same time, the brutal Israeli state terror meted out against the Palestinians has, in recent months, mobilised hundreds of thousands of people onto the streets of Britain. Starmer's total failure to support the movement, limiting himself to mealy-mouthed calls for 'restraint on all sides' is combined with presiding over a major drive to remove Jeremy Corbyn and his supporters from the Labour Party.

In reality his motivation is to make Labour 'Blairite' - that is, a party big business can rely on to represent its interests - but overwhelmingly spurious accusations of antisemitism have been used as the excuse.

Socialists must, of course, oppose all antisemitism, but the Labour right are cynically using false accusations of it to suspend or expel Corbyn supporters, often justifying it by the accused having criticised the brutality of the Israeli state.

It should be no surprise, therefore, that Galloway was able to win a section of voters around these issues. However, these were not the only or even the main questions which motivated Galloway's voters. Decades of cuts to services implemented by Labour Kirklees council, and the last year of devastating economic crisis, will all have fuelled support for him. Galloway's vote is an indication of the potential for a mass party of the working class.

Under Corbyn's leadership there was a possibility of transforming Labour into such a party, but following his defeat it is necessary to start building something new, a party capable of bringing together all the different struggles of the working class around a common socialist programme.

The Socialist Party fights for steps towards such a party by participating in the Trade Unionist and Socialist Coalition (TUSC) which enables trade unionists, community campaigners and socialists from different parties and none, to stand against pro-austerity establishment politicians under a common banner and an agreed platform of core policies.

It was an important first step for the post-Corbyn era that, in the May 2021 elections, TUSC was able to stand over 300 candidates. At the same time we argue for the trade union movement to take steps towards founding a new mass party.

What role for Galloway?

Will George Galloway be able to play a role in the development of such a party? The Socialist Party has in the past criticised Galloway for creating a too narrowly-based appeal aimed specifically at Muslims, rather than the working class as a whole. While this has allowed him to make electoral breakthroughs, winning elections first in Bethnal Green and Bow, and later in Bradford West, he has not consolidated a base or, eighteen years after his expulsion from Labour, built a stable organisation. The lack of a consistent class-based approach, or roots in the trade unions, or a democratic structure, have all been major obstacles to him doing so.

In Batley and Spen his official election propaganda seems to have attempted to appeal to all working-class voters rather than Muslims alone. However, some of his personal statements appear to have been trying to win votes on a reactionary and divisive basis: such as, for example, tweeting that he is a "straight white man with six children", particularly when he was standing against an LGBTQ+ woman. Or tweeting that he would not stand "for the BBC trying to teach our young children that there are 99 genders".

Galloway has a history of these kind of divisive comments, which should be opposed. But the biggest obstacle to him playing a positive role in the formation of a mass workers' party in Britain is his record on crossing class lines and backing pro-capitalist candidates.

He rightly lambasts the Labour right wing for turning Labour into a pro-capitalist party, yet just two months ago, in the Scottish parliamentary elections, the Workers' Party and Galloway stood as part of the "Alliance4Unity" which recommended tactical votes for various pro-austerity politicians, including ten Tory constituency candidates. One of them, Jackson Carlaw, was leader of the Scottish Conservatives from February to July 2020. Plus, in the 2019 European elections, Galloway publicly backed Nigel Farage's Brexit Party.

One of the most burning issues for the workers' movement is the need for the working class to have its own independent voice rather than being politically disenfranchised as it is now. All kinds of debates will take place on how to achieve that, in which the role of fighting trade unionists will be critical. But what is clear is that no public figure can take that process forward by backing candidates of the capitalist Tory party, or Farage and other right-wing populists of his ilk. For George Galloway to play a positive role in the formation of a new party - which his own vote shows the potential for - he would need to adopt a different approach.

30 Jun Can Biden reform the police?

5 Jul Leeds Socialist Party: NHS - the next steps after the 3 July protests

5 Jul Carlisle Socialist Party: How to win the pay claim and rebuild the NHS