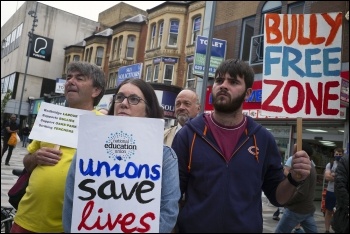 Staff at Oaks Park High School - a large community school in Redbridge, east London - who have been striking over the victimisation of a trade union rep, and against a wider culture of bullying, lobbied Redbridge Town Hall in Ilford on 5 July.

The strike action has already secured jobs and maternity pay for several bullied workers. Strikers are preparing for a final push next term to get justice for their unfairly sacked rep Keiran Mahon. At the rally workers asked: Why isn't the Labour council intervening to end this bullying at a school which it runs? The lively rally was attended by Socialist Party members and other supporters. Legal restrictions mean the next round of strikes will be in September.