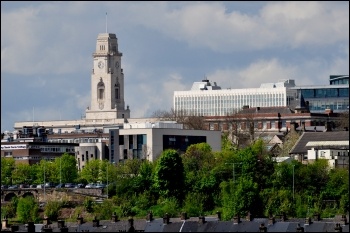 Barnsley Council has approved three 'master plans' for the Hoyland area. Consultation and information has been virtually non-existent, apart from notices on telegraph poles or snippets in the local paper.

A new Hermes distribution centre, the largest in Europe, will be built next to existing homes, schools and a care home.

The recreation ground will also be built over. This was originally given to the miners, but the council ended the covenant without consultation.

There are plans to build 2,000 expensive houses, and more storage units and warehouses, while footpaths and rights of way will be closed.

Lots of campaigning has been taking place over the last few weeks to highlight environmental destruction in Hoyland. 50 people attended the first public meeting for the Reach (rebuilding environment and community in Hoyland) campaign.

Due to Covid restrictions, 30 people were inside the venue and 20 people waited outside. Speakers first addressed the meeting inside, and then again outside.

The meeting was opened out to ask what they wanted Reach to focus on, and what they wanted for the future of our community. There was a lot of anger and frustration. People felt uninformed and ignored by the council and councillors, giving more reason that we need a community voice in the future.

All suggestions and comments were noted to form our plan of action and build Reach. More meetings are planned when restrictions are lifted and we can meet in larger numbers.

Across Barnsley there are further 'master plans'. Campaigners there also attended this meeting, with the result that we are going to unite the campaigns.