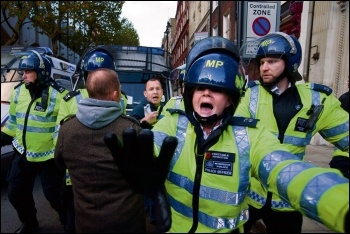 When a Bristol demonstration in March ended in clashes between protesters and police, it was splashed across the front page of every capitalist newspaper.

The media and the great and good, including Bristol's Labour mayor, made sweeping, one-sided condemnations of demonstrators.

Much less widely reported is the finding of a recent parliamentary inquiry - the police used unnecessary and excessive force.

This included 'blading', bringing riot shields down on the heads of seated protesters.

The report describes "particularly troubling" incidents of "revenge policing" - violent assaults on two peaceful demonstrations the following week and subsequent arrests. The forcible break up of a vigil for the murdered Sarah Everard in Clapham was also criticised.

These findings will come as no surprise to those that have witnessed heavy-handed policing of protests. The police act in defence of big business, and have a long history of violent attacks against those deemed a threat to the rule of profit.

This report vindicates those of us who have blamed disorder on police provocation. But the more important question is - will it restrain them in the future?

The very police bill which the protests were opposing increases police powers to block demonstrations, and makes police violence against demonstrators more likely. This cannot be allowed to happen. We must continue to oppose the bill, and push for democratic working-class control of policing and public safety.