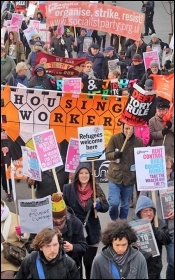 "I am in despair as to how to stop these atrocious companies any other way. We've experienced diabolical rip-offs, incompetence and lies.

"They have damaged our lives for years and years. Many thousands of tenants across the sector experience endless failed attempts to get their problem sorted out. We are ground down.

"I honestly can't see how anything other than withholding money is going to stop them. Even when the Social Housing White Paper is made law, I don't believe that there is any other way to hold these massive, powerful corporations to account."

Residents must climb a rockface when trying to resolve issues with landlords. The system of neighbourhood managers has largely been abandoned in favour of call centres, which are far less efficient and effective.

Complaints are routinely lost, or remain unresolved for long periods. Callers must go through lengthy security questions each time they request an update.

Some associations automatically 'close' a complaint once it has been running for a set period, regardless of whether it has been resolved or not, in order to meet arbitrary internal targets.

Residents also find approaching the regulator and ombudsman largely futile. Cuts to their powers have rendered them mainly unable to offer satisfactory protection or support.

The ombudsman levied a £100 fine against a landlord with a recorded turnover of £17 million. In another case, the regulator ignored complaints about slum conditions on a rundown London estate for years. It took an ITV report before it began investigating the association. Even councillors and MPs complain to the Social Housing Action Campaign (Shac), frustrated at getting unsatisfactory responses from the landlords and housing association senior managers.

The legal system offers little protection. Legal aid is no longer available for many housing issues after it was cut by the government. The process also requires a level of commitment and capacity that is hard for those working, studying, and trying to raise families.

Going to court is rarely a quick process. Even if residents achieve a ruling in their favour, there is no guarantee that the landlord will act.

At a recent Shac meeting, a housing barrister described having to go back to court repeatedly to enforce court orders. These wealthy landlords often prefer paying meagre fines to putting things right.

Tenants and residents thus increasingly conclude that withholding rent and/or service charge is the only way to get their landlord's attention and achieve some genuine engagement.

The strike network - newly formed by Shac - has helped coordination across different landlords, and provides practical resources and support. To date, 17 housing associations are affected, including some of the biggest. The strike is national, involving tenants as far afield as Southampton, London and Glasgow.

Rent and service charge strikes have been used successfully on a small-scale, periodic basis. Housing associations provided homes to three million people in Britain. If this tactic were to become widespread, it could rebalance the considerable inequality that concentrates power in the hands of housing association landlords and their institutional support.