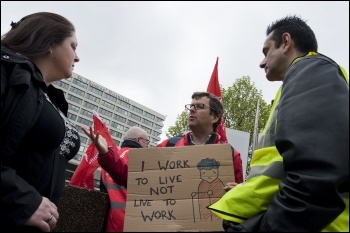 Unite members at St Thomas' Hospital on strike 10 May 2012 as part of the nationwide strike of workers in the public sector against attacks on pensions , photo Paul Mattsson   (Click to enlarge)

More than 2.1 million British pensioners are living in poverty after paying housing costs, a rise of 200,000 on the previous year, and the highest for 15 years. Yet the Tories, and shamefully Labour, are threatening to weaken the triple lock on pensions which keeps pension rises in line with inflation, earnings or 2.5%, whichever is the highest. Keeping the triple lock was a Tory election pledge in 2019.

According to the triple lock formula, pensioners would be in line for an 8% rise next year. The Tories have tried to drive a wedge between pensioners and young people by falsely painting pensioners as living a life of luxury on their inflated pensions. Reality is of course quite different.

If the triple lock goes, pensions will fall even further. Pensioners have already seen the over 75s free TV license scrapped, and there is now talk of increasing the age at which free prescriptions can be claimed. Fuel poverty and winter deaths are already creating real problems for many pensioners. If the triple lock goes, how long will it be before the free bus pass and winter fuel allowance follow suit?

Labour is hinting that it will support reform of the triple lock. We need MPs who will defend pensioners from these attacks on living standards! The trade unions should remember that their members are the pensioners of the future, and if current state pensions are weakened, their members will face a miserable life in retirement. Therefore, we need to build unity between existing pensioners and workers in the trade unions, many of whom face a future with minimal or low pensions in retirement.

Trade unionists, pensioners and youth unite to refuse to pay for the Covid crisis: