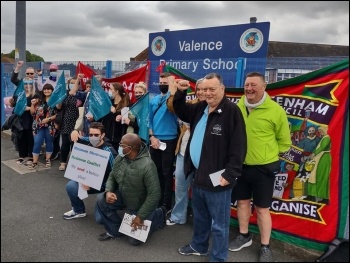 School workers at Valence Primary School in Dagenham, east London are on strike against grim mistreatment through 'fire and rehire' pay cuts and demotions.

Management at this community school - run by a Labour council - plans detrimental changes to the lives of Valence Primary staff. These include forcing teachers to reapply for positions they already hold but with less pay and benefits, and proposing pay cuts or demotions for a third of the workforce.

The need for a working-class political alternative to the Tories and Labour is clear from the role of multiple Labour councils like this one backing attacks on school workforces.

On the picket line it's evident that the workers at Valence Primary are full of passion for the children they teach and supportive of one another and their students' parents. School workers have suffered years of real-terms pay cuts from austerity, then put their lives on the line in the pandemic. They should be getting pay rises, not cuts and demotions!

The workforce could be demoralised by this abuse, and some could end up driven out. This would also lower the quality of care and education for the students, and increase further the workload for remaining staff.

After management refused to listen, the school workers rightly decided to stand up for themselves collectively. The Barking and Dagenham branch of the National Education Union is due to hold its fifth and sixth days of strike action in three weeks as we go to press.

The NEU is picking up new members in the school, and the union is fully prepared to call further action if there is not meaningful negotiation from the employer.

East London Socialist Party is completely in support of the Valence Primary strike.

Schools across the country are facing similar circumstances, after years of the government driving down conditions without a national fightback being led by the unions. The same support Valence has had is required nationally for the good of school workers and a proper education system for the working class.