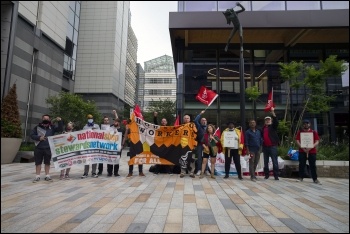 St. Mungo's strikers have now been out on strike for 12 weeks. On 13 July, Unite celebrated their efforts by holding a small protest to salute their sacrifices, sending them back to work with their heads held high in preparation for the next stage of their struggle against workplace bullying. So while the strike may be over for now, Unite remains in dispute with Mungo's.

The team demanded an independent investigation of St Mungo's handling of their grievance. It was management's refusal to even discuss this that led to the strike. Now St Mungos have agreed to an investigation. But the rep who has been suspended remains on suspension.

Beckie, one of the strikers, summed up her experiences: "I joined St Mungo's in January this year, hopeful I was joining a caring and compassionate organisation. It's a charity, so caring is what's expected, right? Within my first couple of weeks, I answered the survey sent around by Steve Douglas with glowing praise. I was brand new, and my first impressions of Mungo's were very positive. Honestly, now I just feel guilty that my answers contributed to organisational propaganda that Mungo's has a zero tolerance of bullying, when our team's experiences show this isn't at all the case."

A number of the strikers have now been made redundant or have decided to resign rather than return to a potentially bullying atmosphere at their former workplace. To continue with the strike in its current guise would have required a further ballot and those balloting would no longer have benefitted from employment protection. This would mean that Mungo's could decide to sack them so workers have decided, temporarily, to call a pause to industrial action.

For those who do return, it will be with the knowledge that their union, Unite, is continuing to fight with and for them. Councillors in London, Bristol and Oxford have all attended our picket lines, and have pledged their support for the Mungo's strikers. They have written to Mungo's demanding an end to bullying and an independent inquiry into the issue.

Vicko Plevnick was, unbelievably, suspended from his work merely for the crime of alleging workplace bullying! St Mungo's is largely funded through local authority contracts and a number of councillors have now offered support for the strikers, attending picket lines and raising concerns with management.

Although Unite recognises these small steps, we are not convinced that the so-called independent consultant is independent at all, or that her report will genuinely consider the testimony of the workers who have been bullied. That is why Unite will continue to mount pressure on Mungo's independently.

We will be pushing for a serious review of governance to consider the role of the organisation's leadership in relation to bullying. We believe that many St Mungo's services remain excellent, but the behaviour of senior management risks undermining the culture and presents a growing safeguarding risk. So the fight must continue.

At the rally, Unite's regional official thanked the branch but also the Socialist Party and the National Shop Stewards Network for its unstinting support for the strikers, noting that solidarity is what keeps workers going and wins disputes. Watch this space for further action!