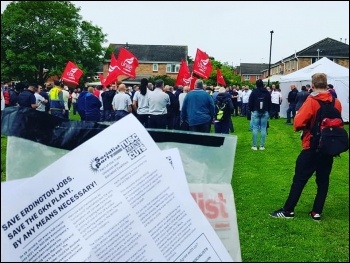 Socialist Party members attended the rally on 7 July to support workers at GKN Driveline Factory in Erdington, Birmingham (see 'Save jobs, save livelihoods, save GKN Automotive - nationalise the plant!' at socialistparty.org.uk). The factory, bought by asset strippers Melrose three years ago, is set to close in 2022, transferring work to Europe.

Senior Unite officials sent messages of solidarity in a similar vein. Ian Ward, leader of Birmingham City Council had the brass neck to turn up in a chauffeur-driven Jag, having slashed jobs and spent £6 million on a scab army to try and break the bin workers strike!

Plant convenor Frank Duffy, with 30 years at the site, gave the only ray of hope through the wet showers. Despite the government supposedly setting aside £380 million for a vehicle electrification 'revolution', the workers' alternative plan, which only required £11 million investment (small change for Melrose), was rejected by management out of hand. The fight continues, with a consultative ballot for industrial action and plans for wider support.

Socialist Party members spoke to GKN workers. An apprentice said he was unlikely to secure a job with the same pay and security. A bin worker on social media congratulated us on our support of GKN and Birmingham council workers. We will continue to help widen support for their struggle.