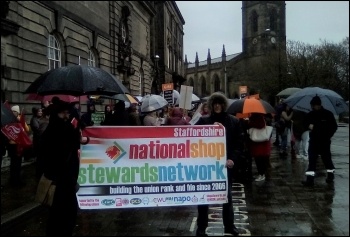 Protesting agains the cuts in Stoke   (Click to enlarge)

Our campaign stall concentrates on demanding a 15% pay increase for NHS workers, and an end to NHS privatisation. It includes two tables end to end, and a red wraparound with six large posters.

We also have Socialist Party flags and placards. There are not many people who can pass by without seeing our stall.

We follow one simple rule - at some point during our talks with people we ask them if they want to buy a copy of our weekly Socialist newspaper, and we make it clear that the Socialist is a real workers' paper.

While some leaders of the main trade unions that represent NHS workers are more or less absent without leave, the Socialist explains what needs to be done and how to do it in great detail.