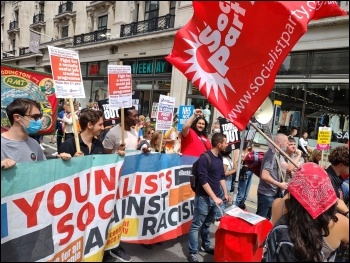 Much of this move towards socialist and anti-capitalist views has been driven by young people's experience of capitalism. During social movements of the last few years - notably Black Lives Matter and the climate crisis - capitalism is often viewed as the root cause of these issues, a capitalist system that is 'exploitative' and 'unfair'.

Respondents to this study also held capitalism responsible for Britain's housing crisis, were in favour of the renationalisation of railways and utilities, and against the privatisation of the NHS. The ideas positively put forward by respondents are key demands of the Socialist Party.

This study serves to further demonstrate that socialism is not at the margins of politics. It now occupies a central place in people's views.

Labour under Keir Starmer is pro-capitalist. And, as this study has demonstrated, no longer represents the views of most young workers.

The Socialist Party organises across the working class, including younger people who are growing disillusioned with the failures of capitalism. We campaign for a mass workers' party that actively proposes an alternative that meets the needs of people - socialism.