'Working-class players do more for us than politicians' 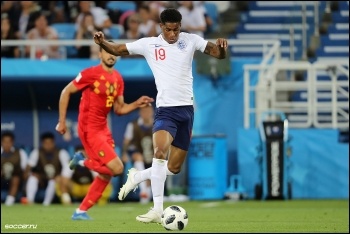 As a football fan that supports England, I never thought I'd see what the team achieved in at the World Cup in the summer 2018 topped. I don't know what the atmosphere was like in 1966, 1990 or 1996, but surely this was better?

Not only did England reach the final, but it's a group of players that cares about the same issues that my generation cares about - NHS, poverty, inequality, fighting racism and homophobia. It's a team of Marcus Rashford, the 'official' opposition that shamed Johnson into defeat on free school meals. Fans cheered players taking the knee, and on the final match day booed racist Nigel Farage.

The three England players that missed penalties in the shootout are black, and were immediately subject to disgusting racist abuse. Sadly this is not new. In the past, the right-wing tabloids would have encouraged the scapegoating of individual players following an England defeat. But the capitalist media couldn't get away with that this time.

One person from Oldham was interviewed on the news the day after the final. He said: "These lads are from working-class communities like us. Some of them do more for us than the councils and politicians, like feeding kids." No wonder working-class people identify with this England team.

At the Socialist Party campaign stall in Waltham Cross, Hertfordshire, somebody mentioned the England players promising to donate their prize money to the NHS if they were to win. Another said: "More than this government has ever done."

Football pundit and former player Gary Neville said: "The standards of leaders in the country in the last couple of years has been poor, looking at that man [Gareth Southgate] is everything a leader should be - respectful, humble and truthful." It's clear he was criticising Boris Johnson and the Tory government.

It wasn't the first time he'd aimed criticism at Johnson this tournament. In response to the racist abuse, Gary Neville went further: "It starts at the very top... the prime minister said that it was okay... to boo those players [taking the knee] who were trying to promote equality and defend against racism."

As a player, Neville admitted he did nothing when teammate Ashley Cole was subject to racist abuse during an England international match. He's said he's proud that these young players act differently.

England player Tyrone Mings challenged Tory home secretary Priti Patel for her faux condemnation of racist abuse. He said: "You don't get to stoke the fire at the beginning of the tournament by labelling our anti-racism message as 'gesture politics', and then pretend to be disgusted when the very thing we're campaigning against happens."

One left political group said: "If football comes home, it's going to Boris Johnson's house. Let's not stand at the front door begging to be let in." That's rubbish. This England team doing well isn't a victory for Johnson. The squad is made up of working-class players. Many have been politicised by the same issues that have radicalised millions of workers in the last year.

This group of players live and breathe football, and love the fans and working-class communities around them. They might not be socialists. But they perfectly sum up the philosophy of former player and manager Bill Shankly: "The socialism I believe in is everybody working for the same goal, and everybody having a share in the rewards. That's how I see football, that's how I see life."