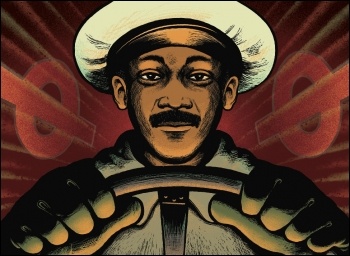 Farewell Leicester Square tells the story of Joe Clough - Britain's first black bus driver. It opens in Jamaica, where Joe was born and began his career as a driver working on horse-drawn carriages.

The upbeat tone of the play is set immediately as we follow Joe's mischievous childhood in Jamaica. His job led him to England when his posh employer, Dr White, moved there in 1903. Dr White does his best to prepare Joe for the cold weather and cobbly roads, but there is an endearing culture shock on his arrival in England.

He immediately falls head over heels when he meets his lively future wife, Margaret, at a public house in London. Phillip Olagoke, the play's only actor, seamlessly transitions between all three characters.

Joe was not only accepted but was enormously popular in the local working class community in Bedford. He was sacked from driving the Number 11 bus on spurious charges, motivated by racism from the bosses. But the other bus drivers rallied around him to get him reinstated.

Unable to fight as an active serviceman in World War One, Joe instead signed up to drive ambulances. This section of his life probably only takes up 15 minutes in the hour-long play, but it's profound and deeply affecting. A badly injured soldier in Joe's ambulance reaches out to touch his skin for 'good luck', and Joe reaches back and holds his face in an attempt to lift his spirits.

Joe's racial identity and experiences of racism are an important part of his story, but he isn't defined by them. His incredible life, vibrant personality, and the joy he found in driving shine through in the writing and a fantastic lead performance.