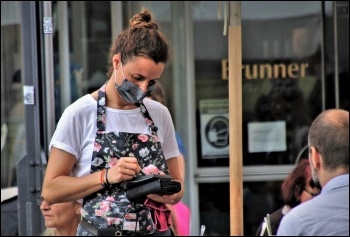 The rows of empty supermarket shelves, missed bin collections and lists of cancelled train services have proved what socialists have been saying all along. It's ordinary workers who keep society running, and without them things soon grind to a halt.

In response to the 'pingdemic', where increasing numbers of people are being 'pinged' by the NHS Covid app to notify them that they need to self-isolate after coming into contact with others testing positive for Covid, the government has announced that workers at supermarket depots and food factories will be exempt, provided they get tested on a daily basis themselves. In addition, double-vaccinated workers in other sectors, such as refuse collection and emergency services, will be able to apply for exemption.

Clearly a way for these essential services to keep running that doesn't put the workforce at risk needs to be reached. Though, as cases rose steadily from the end of May, many will ask why a plan to do this wasn't in place well in advance of 'freedom day'.

The reasons that Johnson and Co are being forced to constantly backtrack and seemingly change the Covid rules on the hoof isn't just down to incompetence or lack of planning. Since the start of the pandemic the Tories have put big business first, and faced a backlash when this has impacted the health of workers and their families.

That's why, having rushed to ease restrictions in the face of rising infections, they're now trying to find a way through the 'pingdemic' that gives the illusion of life returning to normal without hospitals becoming overwhelmed with a fresh wave of Covid patients.

The confused advice of the Tories over everything from self-isolation to mask wearing in recent weeks will have encouraged cowboy employers to do away with any remaining social distancing measures in the workplace and pressure their staff to come to work after receiving self-isolation pings.

The bosses, and their friends in parliament, cannot be trusted to keep workers safe. Decisions about workplace safety measures, including on issues such as exemptions from self-isolation, should be made democratically by workers and their trade unions.

Those workers who are still required to self-isolate should receive full pay, not the current rate of statutory sick pay of £96.35 per week, and protection from disciplinary measures or loss of hours post-isolation so that they're not forced to choose between their health and putting food on the table.

I am an Usdaw union rep and branch secretary in a food distribution centre of a major supermarket. Our members have been affected by the so-called 'pingdemic'. During the pandemic, agency staff have been asked to cover staff absence in a depot in Scotland with active Covid cases!

Now, in response to the 'pingdemic', workers at pre-agreed sites will no longer be automatically required to self-isolate after getting 'pinged' by the NHS app and will instead be offered daily Covid testing. The scheme is to start in 15 warehouses, increasing to 150, with a total of up to 500 in scope, affecting in total up to 10,000 distribution workers.

Nationally this could likely mean another spike in cases for the working class. As always, our union branch encourages the use of 'Section 44' of the Employment Act 1996, as used by the teachers in January, to refuse to work in unsafe workplaces, as a step towards collective action to defend workplace safety.

The 'pingdemic' has forced over 600,000 workers to self-isolate on reduced pay, or in some cases on a measly £96.35 per week statutory sick pay.

The Tories have now been forced to change the rules due to potential food shortages as retail and distribution staff are being 'pinged'.

I have had first-hand experience. As a worker in a pub, and speaking to colleagues and other hospitality staff, we had all deleted the app a few weeks before the 'pingdemic' started. Those who didn't delete it found themselves having to self-isolate.

This has created staff shortages, and meant everyone else had to work longer days. In some hospitality venues bosses have tried to get those staff that have been 'pinged' to ignore it and work.