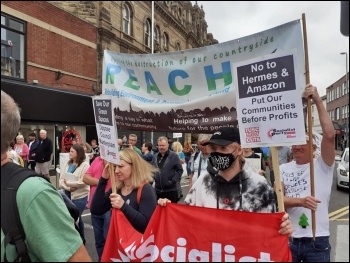 Socialist Party joined the protest in Barnsley   (Click to enlarge)

50 people marched behind a samba band on the 'Big Green Space' protest, calling for our local green spaces not to be destroyed by housing and warehouse developments. The giant Hermes warehouse is all but built in Hoyland, but the residents are angry at the lack of consultation from the council.

When we did get to talk to the councillors, they just said it would bring jobs. We all know what type of jobs they will be - low-paid and very long hours. Campaigners are not only worried about jobs, they are concerned about the loss of recreation space and the effects on the natural habitat of wildlife. We have found a new strength in campaigning together, and are now talking about standing in next year's council elections.