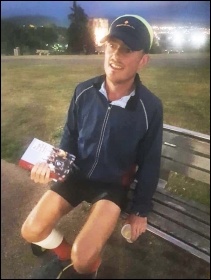 Luke Ivory at the finish line   (Click to enlarge)

Wow! At just after 3am on 21 July, Socialist Party Scotland member Luke Ivory finished the 518 miles of the NC500.

Luke's attempt was the fastest ever in five days, 23 hours, 4 minutes and 17 seconds. This is an incredible two days, 20 hours less than the current record.

Luke ran the equivalent of 20 marathons, and a total elevation of climbing Everest and two Ben Nevis - this is with extremely limited sleep and no proper food. He's a machine - an amazing achievement Luke.

Surprisingly, he is now feeling in pretty good shape, not much worse than a few blisters. Luke is raising money for the fantastic work of Socialist Party Scotland. If you are as impressed as I am, you can donate here: