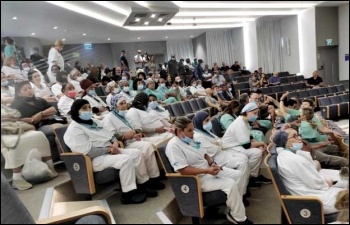 Following three days of strike action by government hospital ancillary workers, the employers have agreed to cancel the elimination of 200 posts created to handle the Covid pandemic. But there is no concrete agreement on the main issues of the strike - pay parity with workers employed by the health funds, and excessive workloads (see 'Israel: Hospital ancillary workers strike over pay parity and workload').

The strikers thank the Socialist Party for the many messages of support they have received. But they are disappointed that the strike was not continued until their demands were met. It's believed that the strike was suspended due to pressure from the right-wing Histadruth (trade union organisation) bureaucracy that is negotiating a national deal with the government, which will freeze wages in return for a moratorium on redundancies.