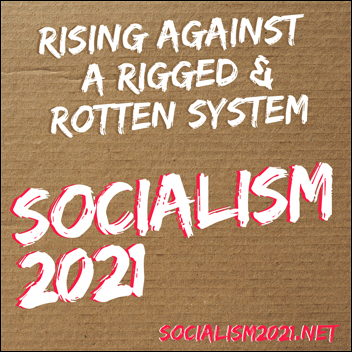 In a world facing crisis on every front, discussion on how socialist ideas can change the world is more necessary than ever.

The Institute of Economic Affairs, a pro-capitalist think-tank, recently raised alarm when it observed through a survey that a majority of young people want to live in a socialist society.

How could it be otherwise? Those in their teens and early 20s have spent their conscious life in a world where all they've known is climate catastrophe, economic crashes, war - all met with capitalist ineptitude at best.

The openness to an alternative way of running society is indicated by the overwhelming support among the young people polled for the re-nationalisation of various industries such as energy, water and the railways (72%). The same number also believes that private sector involvement puts the NHS at risk.

An even higher proportion (78%) blame capitalism for Britain's housing crisis and believe that solving it requires large-scale government intervention, through measures such as rent controls and council housing.

Three-quarters of those polled agree that climate change is a specifically capitalist problem. And more than seven out of ten agree that capitalism fuels racism

The survey also found that, "there are no detectable differences between the economic attitudes of people in their late teens and people in their early 40s. It is no longer true that people 'grow out' of socialist ideas as they get older."

Workers and older people also face a world dominated by austerity and a struggle against the bosses and their political representatives in the Tories and Starmer's Blairite Labour.

Most of those surveyed believed that a socialist system would promote solidarity, compassion and cooperation.

How do we achieve that socialist change? What is the role of the working class in building a new society? Discussing these pressing questions is why we have organised the Socialism 2021 weekend event.

Socialism 2021 will run from Friday 19 to Sunday 21 November. It will kick off with an online opening session on the Friday evening. Then those who travel to London can attend the in-person workshops while those for whom that isn't possible can attend zoom workshops.

The main rally will run from 4 to 6pm on the Saturday so people can have the chance to travel home after if they wish. The rally will be livestreamed. More workshops will take place on the Sunday - again with the option to attend the in-person ones or those held online.

Because of the pandemic we have not yet been able to finalise all the arrangements - but we can now confirm that both in-person and zoom options will be available.

This opportunity to meet up with Socialist Party members, trade unionist activists, other socialists, young people, community activists, student organisers, and others to share ideas, experience, to thrash out a Marxist and fighting approach to the challenges we face, and to collectively learn from history and theory will be a major shot in the arm for all who attend.

Those who have already bought tickets will not be required to pay more when we confirm the details - unless it's a supplement to cover accommodation. But for those who book later, there may have to be an increase in ticket prices to meet the venue hire costs.