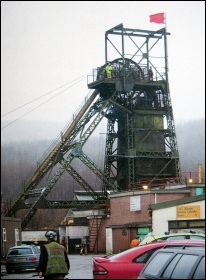 "Thanks to Margaret Thatcher, who closed so many coal mines across the country, we had a big early start and we're now moving rapidly away from coal altogether". These are the words of the prime minister talking about the capitalist-fuelled climate crisis.

Hearing Boris Johnson's jeers about Thatcher's pit closures, we should recall what he was up to, while miners were fighting for their communities in 1984-85.

Johnson was a first year at Oxford University when the miners' strike began. At a time when working-class young people his age were being radicalised by the heroic battles of the miners and their families, Johnson was dreaming of joining Oxford's elite Bullingdon Club, a by-word for upper-class arrogance and privilege.

That hot summer, young miners were on the picket lines - arrested and chucked into police vans for defending their jobs. They were chased by the police at Orgreave - spending a night in the cells after actions like the occupation of the cranes at Port Talbot Steel Works.

Inspired by the strike, many other working-class young people were stopping on their way to work to join miners' picket lines, attending demos, and helping to raise a million pounds every week on the streets for the strike.

In the autumn of 1984, miners' families were living on food parcels, losing their tellies and in some cases, their homes because they couldn't keep up the payments. They fought on.