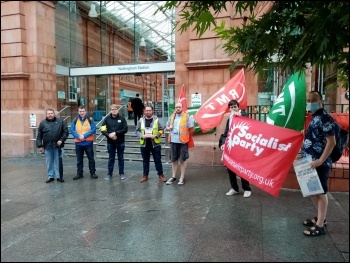 On Sundays throughout August and September, the RMT union is taking two coordinated strikes on East Midlands Railway. Senior conductors, striking over attempts to implement a two-tier workforce, managed to comfortably win their reballot. They were also joined by the East Midlands intercity lines' train managers (guards), who are striking over staffing and passenger safety.

East Midlands Railway has imposed new working arrangements on the multi-unit, 12-carriage Class 360 Trains which means that although two trains are joined together, there will only be one guard who will not have access to the other train.

We understand that there have been multiple instances on the intercity lines where incidences happened on the part of the train they couldn't reach. These ranged from toilets being blocked to a mugging taking place.

Operating company owner Abellio has happily profited from government support during the pandemic to the tune of £4.4 million. However, it is now preparing systematic imposed attacks on its workforce.

They have been stonewalling the union in refusing to negotiate. It was even remarked at the Nottingham picket line that a manager had travelled to Kettering to attempt to intimidate the (new) depot members there, but was rebuffed by the members.

The strike was solid with managers being conscripted to cover the work. However, as assistant general secretary Steve Hedley noted on the picket line, this is a prelude to more general attacks across the rail industry in the coming months on pay, staffing and pensions.