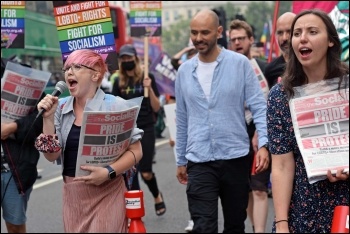 The organisers of London's Pride event, postponed from July to September, have announced it will be cancelled this year, citing concerns over the ongoing pandemic.

The Covid-19 pandemic and the response of the Tory government has had a massive impact on LGBTQ+ people. And the Tories are trying to whip up a 'culture war' to divide workers against each other to deflect anger away from themselves. The response to this situation is clear - not postponing it again but building a fighting political Pride protest movement now.

Socialist Party members took part in recent protests including Reclaim Pride initiated by Peter Tatchell. At these we have found an appetite to fight and organise, and openness to a socialist alternative to capitalism. These ideas go against the material interests of the corporate sponsors of many official Pride events.

The Socialist Party has developed an LGBTQ+ workers' charter, a programme to fight against attacks on our rights, jobs and services (see 'Build a mass movement for LGBTQ+ liberation and socialism' at socialistparty.org.uk). In it, among other demands, we call for a mass council house building programme to deal with the situation where many of us are trapped in unsafe or unsupportive living conditions.

We call for the resources and legal changes necessary to realise the right of trans people to self-identify, including non-binary identities. And ending and reversing austerity for the jobs and services that we need. This includes protecting existing

All of these issues and demands are linked to the need for another way of running society, a socialist society where we can democratically discuss and plan what services and resources we all need instead of deciding on the basis of the profits of a few at the top.

We need an organised democratic movement to fight for LGBTQ+ rights and for the resources and services that we need. The Socialist Party seeks to build such a movement in collaboration with other groups of workers and young people. This needs to be linked to the trade unions launching campaigns to fight back against the Tory government, against austerity, discrimination and divide and rule.

A united working class movement with a socialist programme to fight oppression can push back the bosses and cut across attempts to divide us.

The pandemic hasn't dampened the need for Pride but shown why it is necessary. If you would like to organise with us, discuss what demands and tactics we need to fight for, and join us, then get in touch.