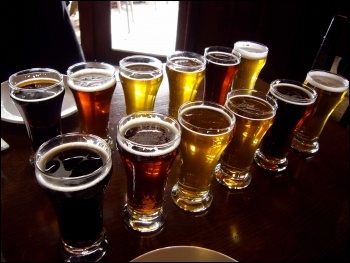 I like my job, the people I meet and the service we provide, but why should we accept exploitation and insecurity each shift? Hospitality bosses make enough money, the industry generates more than £75 billion a year.

Hospitality workers are mainly students and young people - most aren't in a trade union or know much about them. Bosses take advantage of this.

When it gets quiet, we get sent home early, without pay. Officially, we are allowed to say 'no'. But in a non-unionised workplace, with several managers on your back demanding you go home, what are we supposed to do?

Sometimes our holiday days are used, without permission, to get our pay to what we would normally get from our 'guaranteed minimum hours'. This means we get even less holiday of our own choosing.

The rota can change just days before our shift, wrecking plans previously made with friends or family.

It's always a struggle to try to get the shift covered or swapped. And, of course, it depends on the temperament of the manager. If they're in a bad mood, or simply don't care, then no chance.

Recently at my work, a student was put down to do a shift at the time he was meant to be sitting an exam! And there's no collaboration over the rota whatsoever.

Even though we have been vaccinated against Covid-19, there's still concern about catching the virus as we come into possible contact with hundreds of new people in each shift.

Yet, the pub manager advised us to delete the NHS test-and-trace app, as "too many" of his workforce were self-isolating! They want us to come in, no excuses, to make sure the pub makes enough money for the big bosses, regardless of our health.

If we're understaffed and overworked, it's incredibly difficult for us to keep up with hygiene and cleanliness.

In another bar, breaks were scrapped. Managers admitted they cut hours and staff to simply save money.

Many of my workmates want to find another job, but there are simply no jobs out there. The jobs that are on offer, offer so little wages, what's the point in moving?

Under-18s get paid £3 less an hour than over 18s, for literally doing the exact same job. Living costs aren't magically cheaper for younger people. The hospitality industry is the perfect nightmare example of zero-hour contracts and the gig economy. There's anger bubbling away under the surface.

Furlough is being scrapped in October, and the jobs slaughter will follow. Many hospitality workers are still on 'flexi furlough'.

That's why Youth Fight for Jobs is restarting. We're giving out leaflets to precarious workers, and talking to them about getting involved and joining a union to fight to permanently change the industry for the better.