Link to this page: https://www.socialistparty.org.uk/articles/32919 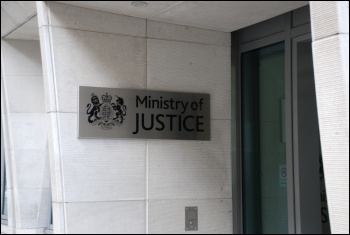 The Ministry of Justice has tabled a pay offer which trades conditions for pay. This is their second attempt after the failed MEP proposals 3 years ago were roundly and soundly rejected by members.

The so-called leaders in PCS are recommending acceptance of this deal. Why, when they were opposed to MEP - what has changed?

Earlier this year the PCS union's second largest membership group, the Revenue and Customs (HMRC) signed up to a 3 year deal which exchanged conditions for pay.

Socialist Party members opposed this deal. We argued the Left Unity HMRC Group leadership should reject the deal and put its weight behind a national pay campaign uniting all PCS members in a fight to defeat the government pay restrictions.

Instead the Left Unity national and group leaders recommended the deal. It was accepted in a ballot which, as Socialist Party members pointed out, was held without the details and implications of the deal being made fully known.

This aside there is little doubt that the HMRC members voted for the deal in large part because they were not given an alternative.

The Group leadership were not prepared to fight for something better and there was no national pay campaign to talk of.

It is therefore of little surprise that we are now seeing a similar HMRC type pay deal being proposed elsewhere. This time in the Ministry of Justice (MOJ).

The deal being proposed is 10.3% over three years linked to a number of changes (worsening) of conditions eg staff currently on 35 or 36 hours moving to a 37 hour week, removal of various location allowances etc.

With inflation currently at about 3% and expected to continue at this level 10.3% over three years is in real terms little better than a standing still offer.

The proposed deal would still leave MOJ pay rates behind other government departments like HMRC.

As with most of these concession bargaining pay deals it's not immediately clear who will lose out and the extent of the loss.

But it is clear that this barely better than inflation pay deal is being financed in part by members losing current entitlements. It falls way short of the union's national 10% claim.

The deal was negotiated in total secrecy by the MOJ leadership (comprising PCS Democrats and Left Unity ).

Details were only disclosed to the PCS Executive during its July meeting, immediately before the deal was announced to members by the employer. It is being balloted on between 20 August and 9 September!

In their haste to bounce members into accepting the deal some issues have been left to later reviews.

Even more worrying and unfortunately in line with previous decisions that the union has made, the effects on the deal on members have not been thoroughly analysed, have not been assessed for equality implications and there are still many questions unanswered which means that it will be difficult for members to make an informed judgement.

These are just a couple of the concerns which caused Dave Bartlett, a Group Executive Committee and Socialist Party member, to call for the ballot to be deferred so that members have all the facts they need and are given time to debate them, before they have to vote.

Several years back MOJ members rejected similar management attempts to impose a deal of this sort. The threat of strike action forced management to scrap their plans.

Nothing has changed to justify the decision yet this time the national union and the group leaders are recommending the deal.

A number of the MOJ leaders are PCS Democrat or Left Unity members of the union National Executive and voted for this year's 10% national pay claim and the campaign to support it.

The MOJ deal which they are supporting comes nowhere near the national claim demand and if members vote in line with the unions recommendation will dilute that campaign even further.

We say reject the deal and force the Left Unity/ PCS Democratic leadership within the group and nationally to take seriously the union's national pay campaign for 10% without strings and for the action needed to achieve this .

This brings us to the key issue. The union's 2021 national pay campaign. Or more accurately the fact that there isn't one.

In November 2017 PCS held a consultative ballot which showed massive support for the union's pay claim and for strike action in support of it.

But here we are four years later facing brutal government pay restrictions with no discernible national campaign and the union's Left Unity leadership actively supporting Groups in each government department to sell conditions for pay.

What has happened in the period since 2017 is a leadership record of failure, incompetence and a move to the right politically.

In 2018 the union held a statutory strike ballot to support its 10% pay claim. The ballot gave a huge vote for action but by a small margin failed to clear the Tory anti-union 50% threshold.

2019 was pretty much a repeat of 2018. BLN supporters ( in which Socialist Party members are active) warned at the time that the demands needed to be widened beyond pay, to include such issues as pensions and jobs.

We were scoffed at. The ballot failed to clear the 50% threshold, the union did not capitalise on the vote to build the campaign needed to fight on pay and other issues. In short, the national campaign was in all senses, ditched.

In early 2020 the union leadership submitted a 10% national claim which did include some of the other issues which they had previously derided as a"shopping list".

Within weeks of submitting the claim Senior Officers ( endorsed later by an NEC majority) withdrew it and asked instead for an above inflation increase.

Their decision to "park" the claim was defended as a response to the Covid-19 pandemic - a gesture to national unity.

The Cabinet Office didn't see it this way. Predictably they welcomed the leadership's "constructive " approach, rejected the diluted claim and confirmed the government pay restrictions.

In response to this humiliation the union's Left Unity leadership reinstated the full 10% pay demand backed up with a petition!. That was the entirety of their national pay campaign.

In the absence of any fight from the union the government announced a pay pause in the Autumn -a classic case of weakness inviting aggression.

A lesson learnt by the government but not the abject politically bankrupt union leadership. The response from the non-leadership to these announcements was silence.

The so-called national pay campaign hardly merits even lip service from them. In fact earlier this year Mark Serwotka informed the union's NEC that he had told the Cabinet Office that despite the pay freeze deals could be done and gave as an example the HMRC deal.

In other words the union's policy was to concession bargain around the pay restrictions, not to fight them.

At the union's 2021 annual conference the NEC national campaign pay motion was carried. It's now August and there is no sign of a national pay campaign.

This could be changed. Instead of going down the road of sacrificing conditions for a pay deal which barely keeps pace with inflation, the MOJ leadership must support a real union-wide campaign on pay and to fight for the union's 10% claim.

There is no excuse. The MOJ Group Executive Committee includes a number who also sit on the union's National Executive Committee and given the shoddy proposals from MOJ management they could be at the forefront of leading a real campaign, nationally, to fight on pay.

But, unfortunately they too have capitulated and have demonstrated a complete absence of leadership. A national campaign is needed which cuts across the isolation of Groups and shuns concession bargaining.

A national PCS campaign would link up with other public sector unions in a united front to defeat the tory pay restrictions.

This is in reality a weak government-despite it's 40 odd seat majority. A government racked with division and scandals and which if confronted and exposed by a socialist led opposition, would be in trouble.

Faced with the health unions rejection of their pay proposals the government went in 24 hours from 1% to 3% ( half of it consolidated) to 3% fully consolidated.

Of course not nearly enough but here is encouragement for unions to unite and go on the offensive. The forthcoming TUC gives an opportunity for leadership but it won't happen without activist and membership pressures.

Socialists inside PCS will be at the forefront of this, placing pressure on the leadership to carry out the campaigns they have been elected to run.

This version of this article was first posted on the Socialist Party website on 17 August 2021 and may vary slightly from the version subsequently printed in The Socialist.