Fight for funding to keep us safe 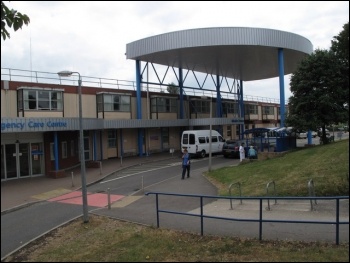 The NHS is crumbling from decades of underinvestment. Queen Elizabeth Hospital in Kings Lynn, Norfolk, has its ceilings propped up with almost 200 steel props. Hinchingbrooke Hospital has set a weight limit for patients who can be treated in two of its operating theatres. The West Suffolk hospital, in Bury St. Edmunds currently has 27 of these 'pit props' or 'acrows' supporting its ceilings.

These hospitals, along with some schools and other public buildings, were built between 1960 and 1990 using reinforced concrete planks. It is these planks which are failing. The building method used was favoured by health trusts and local council-funded projects because it is quick and cheap. What was not broadcast at the time was that these concrete planks, and consequently the buildings, had a lifespan of just 30 years!

In 2020, hospital trusts participated in 'Exercise Hodges' that simulated a scenario where a hospital had to be evacuated due to concrete plank failure. The question was raised: "Would other hospitals have to be evacuated if one hospital suffered such a collapse?"

This is far from just a local problem. Hospitals in West Yorkshire, Surrey and Cheshire, as well as several others, are known to be planning for similar events.

The cost of keeping the structure in West Suffolk safe is estimated to be around £70 million. The government says it has given £1,021 million to help hospitals address similar problems. All part of what it says is the 'generous funding' of the UK health care system.

Meanwhile, in my local area of east London, the Bart's Healthcare Trust proposes the demolition of a hospital built over 100 years ago and the building of a new hospital, using similar 'modern techniques', with 81 fewer beds for the post-pandemic era. This project is welcomed by the local Labour council and will be part-financed by the sale of most of the present site to property developers. Not to build council homes to house the 9,000 on the waiting list, but to build yet more flats that local people can't afford.

We need investment in our NHS infrastructure now - to make our hospitals safe, and to meet the growing needs of our local communities. Private companies looking to make a profit cannot be trusted to do this. We need to build a movement of NHS workers and patients, backed up by the wider trade union movement, to fight for an NHS pay rise and a fully public and democratically run NHS.