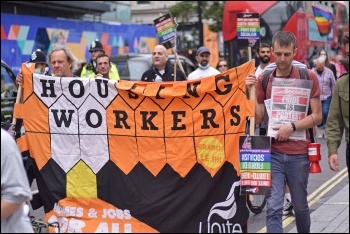 Homelessness workers from different organisations across the sector have come together to set a joint pay claim and fight for better terms and conditions across all workplaces. By working together we can fight back against the race to bottom caused by competitive tendering of services for vulnerable people.

Over the last ten years, homelessness workers have seen a huge decline in their wages in real terms, as well as increasingly stressful working conditions. Those on the 'NJC' scale have lost a quarter of the value of their pay versus the cost of living. A number of organisations (Hestia, Lookahead, SHP etc) have broken away from the scale and pay significantly less. Many of these boast about paying the London Living Wage - a wage on which it is impossible to pay for childcare or buy a house, that leaves members trapped in insecure private rented accommodation. Despite being forced to work throughout the pandemic, often at risk to our health, this shows little sign of changing.

This sad state of affairs has been largely driven by homeless charities competitively tendering against each other in a toxic race to the bottom. In an effort to expand and win more contracts, these organisations have transformed from small client-focused organisations into corporate behemoths focused mainly on growth in income. Ask any manager why our wages are so low or why our hostels are in a state of disrepair, and they will say that they have no choice - as if they spent more, they would be at risk of losing their contract to another organisation which is willing to undercut them.

We should always take these claims of low income with a pinch of salt. Lookahead is infamous for paying low wages - yet has £85 million in reserves, and last year had a surplus of almost £2 million. As homelessness workers we have had enough. Reps from Unite and Unison have begun to discuss setting a joint pay claim and sector standards document for 2022-23 (covering maternity, paternity and sickness pay, etc) If we can establish a joint pay scale and set of conditions across the homeless sector, our employers can no longer use competition as an excuse. We can start to turn the tide and force conditions up.

Come to our public meeting on 16 September, 6-7pm via Zoom, to join the fightback and plan our campaign for decent pay and conditions across the sector