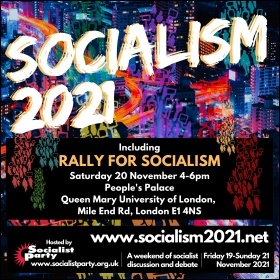 This will be the biggest in-person socialist event this year. And we need it. We need the chance to get together and talk about the socialist alternative to this rotten system of capitalism.

Even surveys by the defenders of capitalism keep finding growing interest in a socialist alternative. A new Fox News poll in the US found 59% of Democrats had a positive view of socialism, up 19% from February 2020.

As the horror of the Afghanistan disaster and the climate catastrophe compete to expose the failings of capitalist leaders, bigger numbers of people want an alternative.

The next month will bring the end of furlough and the so-called uplift in Universal Credit.

Bosses are looking for ways to recoup the cost of the last year off the backs of workers. This is capitalism in 2021, and why you need Socialism 2021!

The last year has shown over and over again the preparedness to fight back. Thousands marched on Black Lives Matter and Kill the Bill protests, after the murder of Sarah Everard, and against Israeli state terror.

Workers have taken strike action against 'fire and re-hire', and other attacks on pay and conditions. Health workers are balloting on action against the Tories' pay insult.

But how can these movements win? What programme is needed? What are the lessons of past working class and youth struggles? What does Marxist theory have to offer for changing the world today? How does the fightback in the workplaces, campuses and communities connect to what happens in elections? What are the lessons from the Corbyn experience for building a working-class political voice? This will all be part of the discussion at Socialism 2021 - and more.

The Socialist Party has secured a venue in which hundreds can come together safely to discuss and debate in real life! There will be in-person workshops at Queen Mary University on the Saturday and Sunday.

There will also be separate workshops on Zoom for those who can't travel, and to involve our sisters and brothers from the Committee for a Workers' International (CWI), the world socialist organisation to which the Socialist Party is affiliated. The rally will also be livestreamed.

There will be a major socialist bookshop, stalls, a social to continue all the discussion informally, and places to stay over for those who wish. Those who day-trip to London for the rally and workshops on Saturday will get the chance to participate on Zoom on the Sunday.

Given the costs of venues today, ticket prices will rise slightly. But those who have already bought tickets won't be required to pay more unless they want to upgrade to the 'golden ticket' which includes a hostel bed. The new ticket prices and 'golden' option will be online from 1 September.