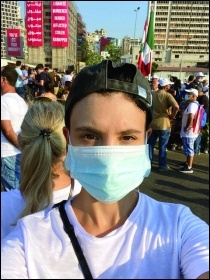 It was the morning of 4 August, the first anniversary of the explosion in Beirut. My family and I were sitting round the breakfast table at my godmother's house, all of us reminiscing about where we were a year ago that day.

Videos remembering the event started circulating on social media, and every so often I would glance up at my sister, who was periodically in tears, staring down at her phone. She almost lost her life that day. Her PTSD is strong, and every time she heard a sudden noise or loud bang she would jump out of her skin.

Later that day we returned home. All of us crowded round the television watching the victim's families arriving at the port for the memorial service. People on the news were sharing their stories about how they lost their loved ones.

The army dispersed around all of Beirut, roads being closed off to allow for the demonstration to begin. It was tense. My mother and sister were on edge, debating whether it would be safe to go down to the protests.

My mother argued that it was important we pay our respects at 6.07pm, the time the explosion set off that day. I suddenly felt a wave of sadness and determination. I too agreed with her, and that afternoon we walked down from Ashrafieh to the port.

Along the way we met our cousins. They were waving the Lebanese flag proudly. Today was a day of unity and coming together to remember the horrible, tragic events. There was a sense of community from everyone marching down.

For the first time, no other political groups were the main source of attention, although ultra-right wing parties were around trying to instigate trouble.

There were some placards being held high with the slogan: "Everyone, means everyone". This was in relation to the government and how everyone in the government needed to step down. All the parties need to be dismantled for the country to start afresh, without the rule of the mafia-like government that has been in power since the 1970s and the civil war.

It was 6:07pm and a woman announced over a loud microphone in both Arabic and English that it was time for a moment of silence for the victims and their families. I looked across the highway which had been blocked off for the masses of people, the 300,000 people that had all gathered to mourn our Beirut, our Lebanon.

I looked up at an abandoned skyscraper that had no windows, the blast having taken them all and never being repaired. There was a massive red banner draping off the side with the words written in large letters: '4 Million Lebanese, Murdered. Injured. Afflicted. Stolen. Kidnapped'.

I thought to myself, if all of us could unite like this, if the working class could come together every day, we could have a beautiful, thriving country. Instead, what was waiting for us after the moment's silence had expired was cancerous teargas and rubber bullets. The aim was for us to meet at the port and then head down to parliament to demand answers, but the army was against us. It wasn't safe and most of the people went home.

There was, however, a moment of peace and serenity as they began to read the names of the victims out loud, and the military planes flew across the sky in a flypast. I thought back to that moment a year ago, as the tears rolled down my face and I remembered what it was like to wonder if my family was still alive.