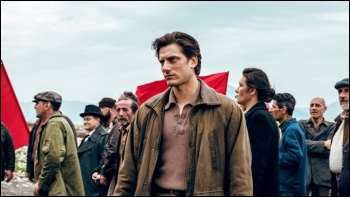 Martin Eden is an Italian film based on Jack London's 1909 novel. I highly recommend it. Jack London set his novel in the US, the film moves the story to Naples in the 1920s and 1930s.

Jack London was a writer and socialist, a member of the Socialist Labour Party, and then the Socialist Party of America. Born into a working-class family, he was homeless for a time, and a sailor, before he became a successful writer.

The academic establishment plays down or ignores Jack London's socialism, referring to him as 'America's Kipling', and the embodiment of the 'self-made man' and the 'American Dream'.

Martin Eden is held up as proof of the potency of the American Dream. Not what Jack London intended: "One of my motifs, in this book, was an attack on individualism (in the person of the hero). I must have bungled it, for not a single reviewer has discovered it."

Moving the action to 1920s and 1930s Naples - with its political mix of socialists, anarchists and fascists - the film gives Martin Eden back the intention Jack London had in writing it. Martin Eden's journey to transcend his working-class roots for the love of an upper-middle-class woman, Elena, leaves him alienated from the working class, but not accepted by the woman he loves or her family.

An older writer introduces Martin to socialist meetings, he chooses not to get involved. The regret that permeates the rest of his life, and his dissatisfaction with material success, stems from this choice.

The politics in the film are not central, but it is an important thread. There are strike meetings, and fights between socialists and anarchists afterwards.

The film is intercut with political newsreel from the time. It portrays the growing confidence of the fascists and the threat of war. In a restaurant, a fascist leader salutes Martin Eden, but says that in the coming war, writers will not be needed.

At dinner in a middle-class household, Martin Eden lambasts liberalism as opportunistic and supporting nationalisation and state intervention. At that point he is hostile to socialists.

At the beginning of the film, Martin says: "So the world is stronger than me. For so long as I do not get overwhelmed, I am also a force". His individualist approach is powerfully juxtaposed with the deathbed speech of his friend, Russ Brissendon: "Fight on. Socialism is the only thing that will save you from the disappointment that is approaching."