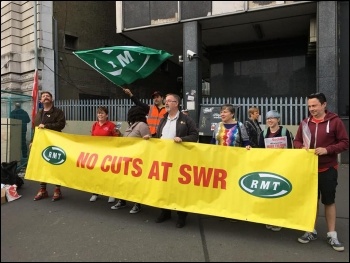 The RMT and others have highlighted that cutting rail services won't help with the vital task of encouraging people out of their cars and onto public transport.

People don't want to be crammed like sardines on commuter trains. SWR say it is prudent to cut the number of trains because the public already subsidises the railway with billions of pounds. But why should we be paying any of their big wigs' wages?

We will continue to fight for a reliable, affordable and publicly owned transport network, which protects jobs and ensures full safety for passengers.